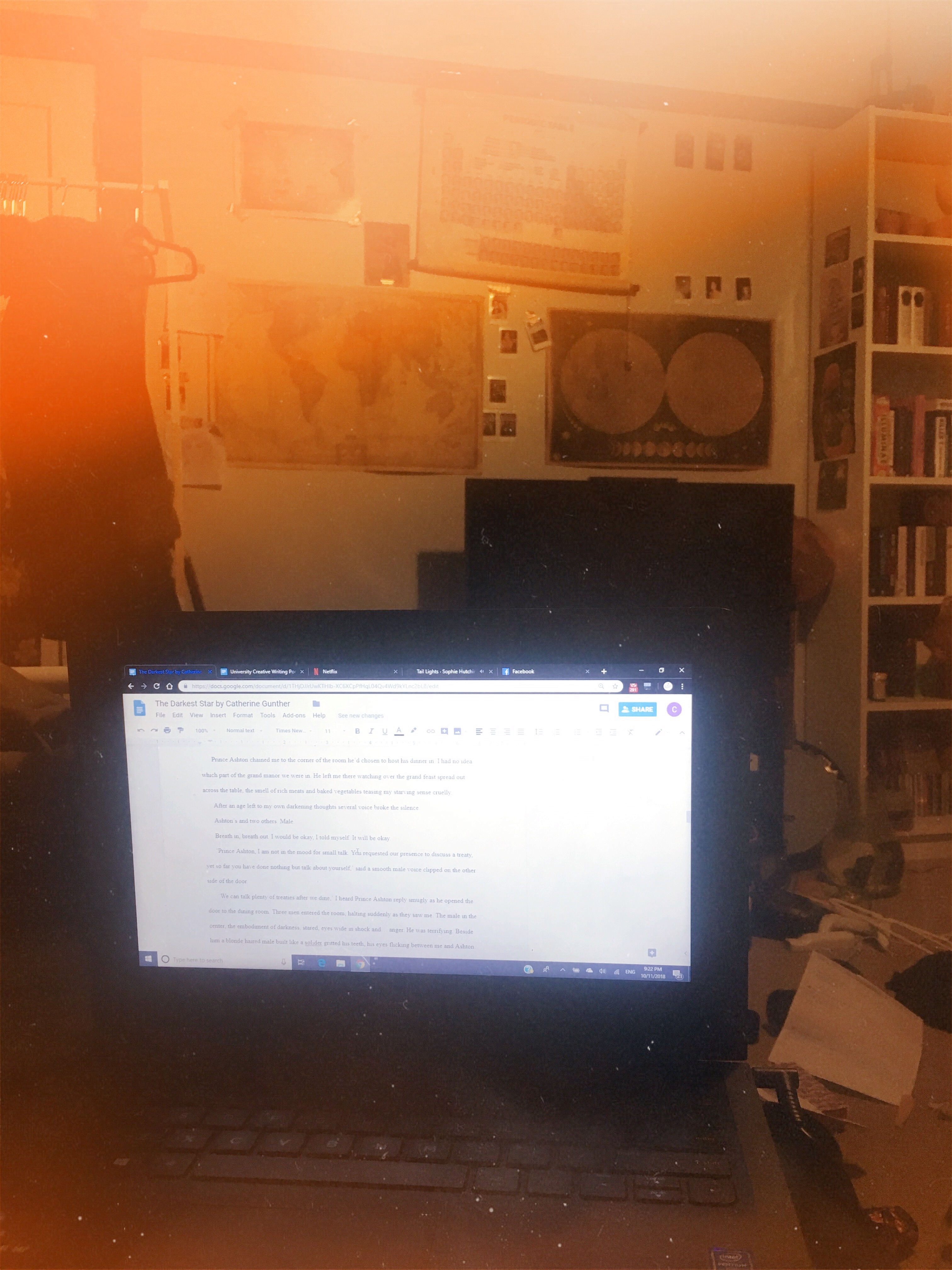 It has been a little while since I updated you guys with what has been going on with my novel. Well, for now, I am 1/3 of the way through my estimated number of chapters for this first book.

It’s exciting at the moment because the chapters I am currently working on are starting to get gritty and have so much layered meanings in everything that will be important later on in subsequent books.

Check out a snippet of what I’m currently working at the end of this post!

I have hit multiple road blocks lately over the last two months that have put a halt on this project. April saw my father get married, so that month was a write-off flying between the Gold Coast and Sydney every week in the lead up to that to help with everything. I also quit my job this month and moved to Sydney to start working for a gorgeous shoe boutique called Quincy’s. So it has been super busy.

But I’m getting back into this first draft and powering on! My goal was to knock out another 4,000 words this week on my day’s off from work. I ended up writing just over 2,000 words, so only half of my goal but I’m pretty proud of the chapters I’ve been working on in the later half of the book.

I also discovered the most amazing writing space in Paddington this week, a gorgeous cafe/bookstore called Ampersand which is honestly a booklovers dream! Great food, great coffee and you can sit there and write on one of the three levels for a long as you want! I wrote so many words that day!

I’ve also been playing around with title ideas for this book and I think I am closer to deciding on something that is far more fitting than Crown of Ice, which was my original idea. I won’t tell you what it is yet but it’s a lot better than that one haha.

Anyway, I best be getting back to it, Chapter 12 isn’t going to write itself after all.

Despite being mid-afternoon, the sun was quickly fading as Morena lead the mare through the wood towards the small village of Apricity. Mangata’s lands never saw more than six hours of daylight, spending much of each day plunged in darkness, lit only by the sea of stars above. The horse trudged its way through the fresh fallen snow as the silent woods slowly filled with the laughter of children playing nearby. Celebrations were already underway from the laughter and song wafting through the trees. As was tradition Morena would always return home on the day of the blue moon, Mangata’s most sacred night.

It marked the first of seven nights of celebrations and rituals to honour the goddess of death and winter, Torvnix. On the night of the blue moon the veil between the worlds of the living and the spirits was said to be so thin you could speak to those you’ve lost. Tonight, the village would come together to throw an extravagant party, well beyond what they could afford, with the tables in the village square lined with a months’ worth of food, children singing and dancing around the bonfire while couples danced. For most it was a happy occasion.

Morena dismounted the horse as they reached the edge of the trees, pausing to look back over her shoulder into the darkness enveloping the wood. Behind her in the darkness the shadow beast stalked toward her, its jet-black eyes locked with her own.

‘Stay,’ she commanded, ‘I’ll come back for you later.’ It growled at her but obeyed, creating a heavy thud as it sat in the shadows. Morena gave the creature a half-hearted smile before returning her attention to the village, leading the mare towards a small group of children playing in the snow.

The children had built two rather impressive snow forts from which an onslaught of snowballs flew between. The pure joy and laughter radiating from them made Morena laugh. How wonderful it is to be so carefree she thought.

Upon spying Morena one of the little girls, perhaps five or six years old, ran towards her shouting her name.

‘Morena you’re back!’ she squealed as she barrelled into her for a hug, wrapping her arms around Morena’s leg. ‘And you brought us a pony?!’

Morena chuckled as she picked up the child, resting her on her hip as she continued to walk into the village square with the mare. Excited for her return the rest of the children trailed her, jumping around, asking about what adventures she had been on this year.

‘Emeline, you know I’ll always come home to you,’ she smirked as she tapped the child’s nose affectionately. In the years since her own family’s passing the village had become her family, and the children her younger siblings of which she was fiercely protective. A small tug on her cloak caused her to pause. Holding her outstretched arms a small girl named Sierra held out a crown weaved of blood red roses and shards of ice. She gently put down Emeline and knelt before Sierra as she placed the ringlet on her head.

‘We made this today,’ she beamed, proud of her handiwork, ‘for our faerie queen.’ The rest of the children giggled as the makeshift crown sat lopsided on her head. After a quick adjustment Morena rose and bowed before the girl.

‘Well then if I am the faerie queen, who shall be my princess?’ she asked sweetly, ‘and where will we live, in a grand castle?’

‘No silly,’ she giggled, ‘we will all live in the snow fort!’ The children around her cheered and started dragging her by the arm towards their snowball strongholds.

‘Perhaps Morena can play with you all a little later,’ a mature voice called out. Limping from the village square a rather gruff faced man approached with a soft smile, ‘and you little elves should be getting back to your families. Tonight is a special night after all.’ With that the village children scattered off towards their homes in preparations for the festivities to come.