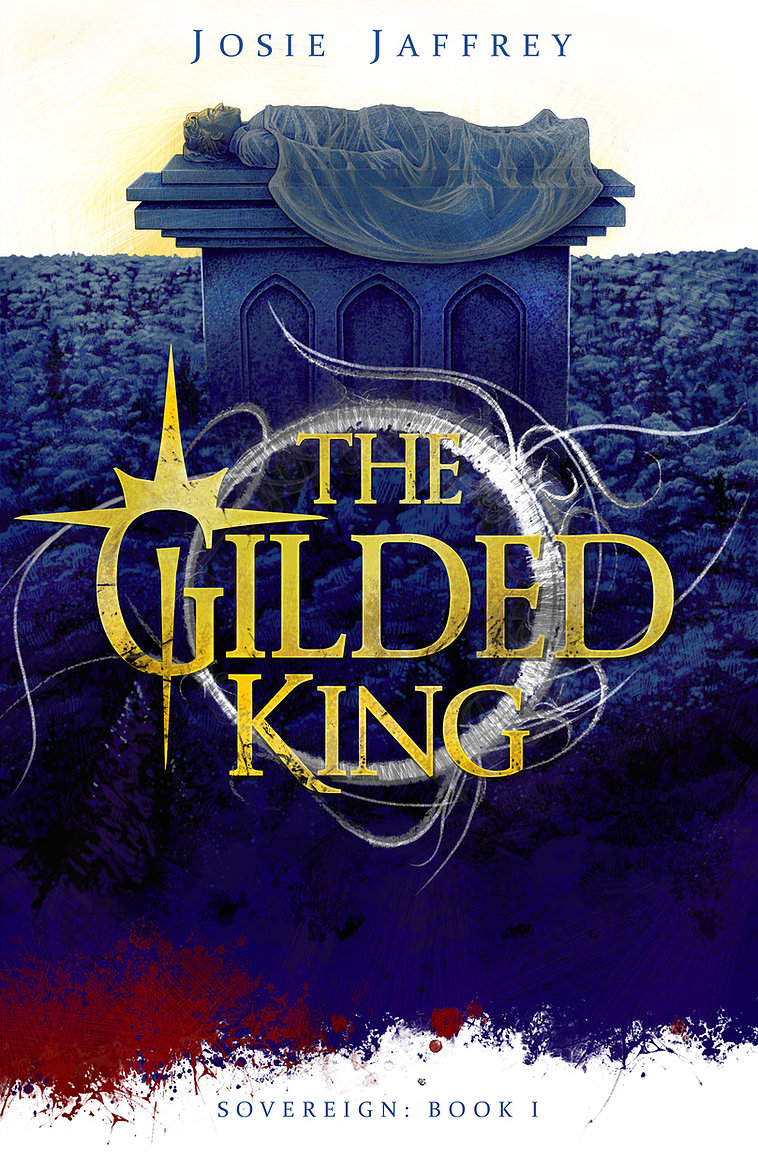 Happy Release Day to The Gilded King by Josie Jaffrey!

Jaffrey has done it again kicking off her newest series with a massive bang! I was given an eARC copy of this book for an honest review and in all honesty this book is bloody fang-tastic. If you love vampire novels with a heck of a lot of grit then this is a book for you.

The Gilded King kicks off centuries after the ending of the first series (read my review of that here) with a whole cast of new characters, as well as some favourites from the original series. Supernatural romance has never felt so exciting and dangerous in this new series from Jaffrey, with the book perfectly setting up the rest of the series with equal thrill, deception and intensity.

In the Blue, the world’s last city, all is not well.

Julia is stuck within its walls. She serves the nobility from a distance until she meets Lucas, a boy who believes in fairytales that Julia’s world can’t accommodate. The Blue is her prison, not her castle, and she’d escape into the trees if she didn’t know that contamination and death awaited humanity outside.

Beyond the city’s boundaries, in the wild forests of the Red, Cameron has precious little humanity left to lose. As he searches for a lost queen, he finds an enemy rising that he thought long dead. An enemy that the humans have forgotten how to fight.

One way or another, the walls of the Blue are coming down. The only question is what side you’ll be on when they do.

Now I can’t say too much because I really don’t want to spoil how incredible the plot of this novel is but it is fantastic.

Now I really like Julia and Lucas, the central protagonists aka the romantic couple of the story. They’re essentially two teenagers trying to make the best of a really awful situation for both of their races by sticking together and it was sweet to read their intimate moments. Julia is a strong young woman with a lot of resolve. I really enjoyed reading exploring her emotions with her and the level of intelligence she has for a teenager. She longs for the freedom the Red may offer but is torn, unsure if it worth the risk and leaving those she loves behind.

Lucas is a interesting character and not at all what I expected when I was first introduced to him. We get the sense that he is a massive outsider of his own race, and that is really odd, since young silver, one’s like him, are suppose to be revered, seen as a blessing. The circumstances of his existence are a mystery, since Silver parent’s would never give up their child. So who is this orphaned silver who has the softness of someone with a human conscious?

Cameron! Cameron, my once little cinnamon role, is back and hardened by a series of events we start to learn about in this new series. His character is the major link back to the original series protagonists Emmy and Solomon, who are at the centre of the downfall of this last remaining human city. Emmy is missing. Solomon is nothing more than a statue, a gilded king in the city temple. And they hold the key to a solution for all of the Silver and humans. If they can be saved from an unknown fate.

The world of The Red and The Blue are expertly written, the shift between the two each chapter, from Julia to Cameron, works really well to paint a wide picture of a world that has truly fallen beyond salvation. The way various sub-plots and perspectives are woven together is a huge step up from the Solis Invicti Series, setting the bar extremely high for what is to come.

It is a fantastic read, rich with colourful and diverse characters, incredible imagery and powerful storytelling. The Gilded King is a must read for anyone who loves vampires, romance, dystopia settings and action packed adventures.

The Gilded King is out today, available via Amazon.