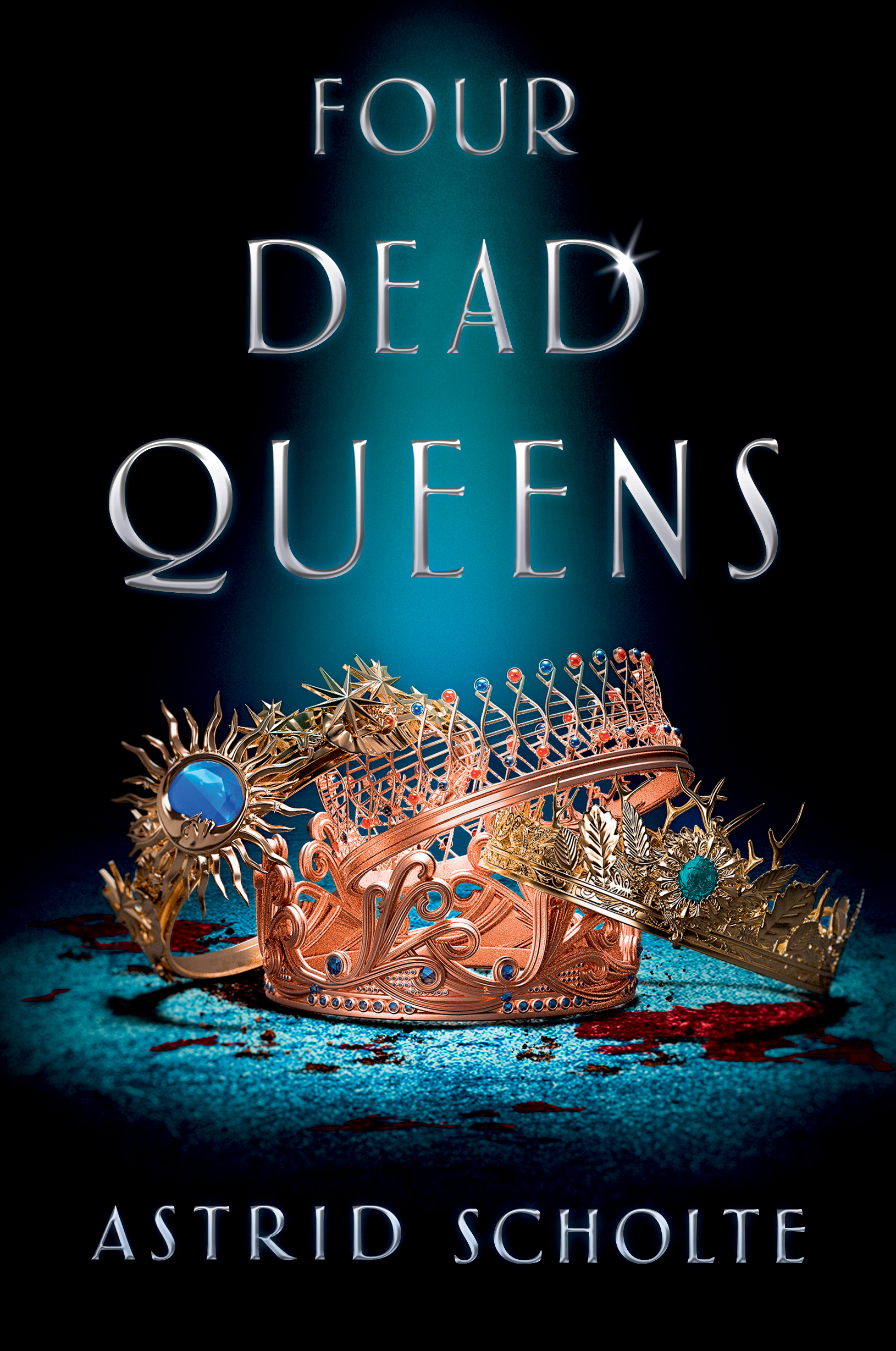 When you come across a book called Four Dead Queens, you feel like, at least in some regard, you know whats going to happen. But let me tell you…  YOU KNOW NOTHING JOHN SNOW! And in a way, there are some game of throne-y vibes mixed with a tech enabled world. It wild, ridculous and full of twists up until those final pages. For a debut standalone it was a great read and I’m excited to see what Astrid Scholte has up her sleeve in the future.

Four Queens. A divided nation. A ruthless pickpocket. A noble messenger. And the murders that unite them.

Seventeen-year-old Keralie Corrington is one of Quadara’s most skilled thieves, but when she steals an unexpectedly valuable package from a messenger she is soon entangled in a conspiracy that leads to all four of Quadara’s queens being murdered.

With no other choices and on the run from her former employer, Keralie teams up with Varin Bollt, the Eonist messenger she stole from, and together they race to discover who has killed the queens. But when dark secrets threaten their reluctant partnership and put everything at stake, Keralie and Varin must use all their daring to stay alive and untangle the mysteries behind the nation’s four dead queens.

I am writing this review less than an hour after finishing the book, and throughout the day it took to read I always felt that I knew what was going to happen, that I had figured it all out. That I was smarter than the author thought I was, having cracked the mystery before the characters do, only to be completely and utterly wrong time and time again. Four Dead Queens is clever, so clever you won’t even be mad for being wrong as Scholte’s writing has you eating out of the palm of her hand. The amount of verbal NO’s I squealed through my read of this I truly believed had my housemate alarmed. And also equally intrigued by what I was reading.

Our main character Keralie is complicated to say the least. Involved in rather shady business from the get go you’re already a little cautious of her. You also kinda love her for it. She’s opinionated, knows what she wants and will stop at nothing to get what is hers. But the conspiracies, the palace politics and the outright madness she gets caught up in makes you really feel for her character, for what she’s been through, what she continues to goes through and how she’s trying, really trying to be a better person than everyone believes her to be. She’s more than the pickpocket. More than the theif. She’s certainly not an innocent person, but then again, no one in this book is it would seem.

The four queens are also full of secrets, breaking laws and challenging the roles they have been given. Scholte gives us short peaks into who they are and what they are willing to do to get what they want. Knowing this makes their demises so much worse. Even for the queen I initial didn’t like, Stessa, you really feel for her when you start to understand their personal lives.

Initally the book is slow going, but that is understandable when Scholte has built this impressively diverse, interesting and detailed world. It’s a level of depth you’d expect to find fed to you across a larger series of work, yet she has expertly built a nation that is both vivid and alive in a few short chapters, allowing the story to unfold effortlessly within it. It’s believable, different and clear. It’s not easy to vividly create a nation with four completely different worlds within them. She hasn’t created one nation, but four, joined together by the mystery of the four queens who rule them together…until they don’t of course.

I really cannot say much without giving the story away which I really don’t want to do. The twists, the turns. I think I have whiplash…maybe? But what I can say is it is an addictive read. Once you get going you can’t stop. Scholte has written a well crafted mystery that you will continue to think you have figured out, only to find at every turn a surprise you did not see coming waiting for you. In a way I am sad that it is a stand alone, for I would love to see more of Quadra, it’s people, the Queens and our questionable heroine Kearlie. But when you get a standalone that wraps up as well as this does you really are satisfied with how it ends.

Four Dead Queens is definately a stand out stand alone novel. It’s perfect for fans of The Red Queen or Three Dark Crowns. It’s exciting, mysterious and cunning. And now that it’s over I think my fast beating heart can rest… at least until Scholte’s next project.

Four Dead Queens will be published by Allen & Unwin in March.

Disclaimer: I recieved an advanced proof of this book. Thoughts and opinions are my own and do not reflect my employer Allen & Unwin.