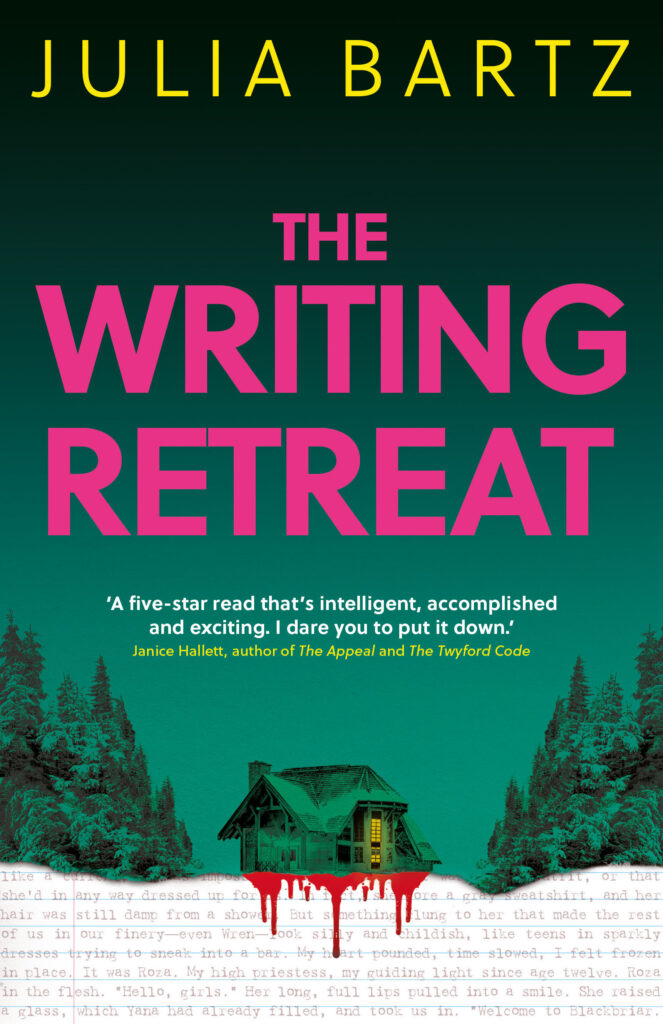 Hello 2023 and hello to my first book of the year, my summer holiday read The Writing Retreat by Julia Bartz.

Now this novel was quite the wild ride. Brash and dramatic the book had me sold on the gothic and perverse situation writer Alex and her fellow writers had found themselves in. With an intriguing premise of a book deal worth killing for, Alex’s story went from zero to one thousand by the end of the book. As someone who typically doesn’t love reading suspense/thrillers I did enjoy this debut.

The dark, atmospheric, feminist offspring of Squid Game, The Hunting Party and Misery

A book deal to die for.

Five attendees are selected for a month-long writing retreat at the remote estate of Roza Vallo, the controversial high priestess of feminist horror. Alex, a struggling writer, is thrilled.

Upon arrival, they discover they must complete an entire novel from scratch, and the best one will receive a seven-figure publishing deal. Alex’s long-extinguished dream now seems within reach.

But then the women begin to die.

Trapped, terrified yet still desperately writing, it is clear there is more than a publishing deal at stake at Blackbriar Estate. Alex must confront her own demons – and finish her novel – to save herself.

This unhinged, propulsive, claustrophobic closed-door thriller will pull you in and spit you out…

Now I will say The Writing Retreat isn’t a perfect novel but it is pretty compelling and fun to read with its satirical nature. There is much of it I did enjoy and devoured. There was also parts I found too over the top that I was taken out of the story. But I would recommend adding it to your summer holiday suspense thrillers reads.

Alex is a complicated character, as are her fellow female writers, all with their own issues and hang ups that follow them into Roza Vallo’s retreat. And the book starts strong, no doubt about that. Suffering from a year long case of writers block the idea of writing 3000 words a day of a brand new story or get kicked out of the retreat has Alex already feeling the stress. Add in the drama of her ex-bestie Wren being there with all their unresolved issues and the rumours being spread amongst the women its a lot to deal with. But despite this Alex does come up with her story, and writes tirelessly. Drawn to the mysterious death of a previous resident of Roza’s Estate, Daphne and her obsession with the demoness Lamia, she works on a historical fiction retelling of her story. I enjoyed the way Julia included pages of this novel The Great Commission Alex was writing throughout the book so you could see the arc of the novel and Alex’s own journey in survival. It helped to ground what was happening and the connections happening in Alex’s mind.

But after Roza drugs all the women with LSD one night to help them open up to their creativity, Poppy goes missing in the snow, presumed dead, and things really start to take a dark turn. While the women search for her (Alex, Wren, Keira and Taylor) Alex later discovers a camera in the basement where Poppy was last seen opening a door to the snowy outside world. But there is also a faint light peeking out from behind the wall under the camera. Spooked the women quickly realise there are cameras everywhere, that Roza has been watching their every move, listening to every conversation.

Things begin to escalate when Alex fakes being unwell to avoid dinner and searches for Poppy, discovering a secret passageway that leads to a concrete cell where Poppy is locked up, weak and semi drugged up. However someone comes up behind her and knocks her out before she can help Poppy out of the cell. When she awakes Alex finds herself locked up with Poppy, questioning her. We find out Poppy isn’t her real name, instead she is a journalist named Zoe who paid the real Poppy to take her place so she could come to Roza’s estate in search of proof. When Alex asks proof of what, Zoe reveals Roza had previous murdered a family member for her novel, one Roza published to much acclaim.

Several hours later, when Alex doesn’t return Keira, Wren and Taylor also find the secret passage and stumble into the cell room, pretty freaked out, only to get betrayed by Taylor who locks them in the room. It is revealed to Alex, Zoe, Keira and Wren that all of this had been orchestrated by Roza, Taylor and the other household staff were also involved. A choice is then given to the women, continue to write their novels and they’ll be given food and water. If any of them don’t write, they all die of thirst and starvation.

And so they continue to write while trying to figure a way out of their dangerous situation.

When Roza asks Taylor and Yana to bring up one of the writers to her rooms the women take the opportunity to attack when the cell door is opened but the ensuing struggled causes Taylor to pull the trigger on her gun, killing Zoe. It is only the start of several deaths that occur after that scene. Later Yana helps Keira to escape on a snow mobile, but Taylor shoots her in the shoulder and drags Keira’s body back to the house. Yana is also killed a short while later by Taylor for betraying Roza.

Leaving only Wren and Alex left the pair are brought before Roza to finish their novels, told once they are done one of them will have to destroy the others work. The printed copies of all their work on the retreat on the desk. The only copy. It becomes clear to Alex that Roza had previous taken both Yana’s and Taylor’s books and published them as her own, but had somehow ensnared them in her web to be complicit in it and hang off her every whim.

Alex decides to burn her own novel in that moment and gives a pointed speech about power to Roza. She won’t let her have her novel, to steal it like she had so many times before from other talented writers.Roza orders Taylor to kill her but Alex makes one last request to have a toast first, having slipped poison into the wine decanter earlier, Taylor dies after taking a sip of the drink. However Roza realises what Alex has done and doesn’t drink.

This is where we get to the part where I fell out of the story with the ending. It felt like it didn’t quite fit, or was believable even after all the crazed and ridicous things Roza put the writers through. Keira, having not been killed it seems, appears in the room and attacks Roza. Escaping from the room the three writers hunter her down until they find her in the attic, however Roza manages to capture Wren with a knife to her throat, and leverages her relationship with Alex to take them all to a room downstairs and lock the three of them inside. Roza decides she is done with this all and decides she will spare their lives and leaves them locked in the room as she flees the estate and disappears.

Keira picks the lock and with the snow having thawed they take Roza’s car and drive towards town until they have mobile reception to call the police. Shortly afterwards the cops descend on the Estate in droves. Then we jump forward several months to learn Roza was never found, and the police have had no leads, believing she probably didn’t make it through the snowy woods and froze to death. That her body would show up eventually. Alex isn’t convinced, however she has just launched her debut novel, The Great Commission, having survived the ordeal at Blackbriar Estate and working through her PTSD with a therapist ahead of moving from New York to LA. Then, out of the blue, Alex recieves a text from Roza congratulating her on the novel’s release.

Overall I really did enjoy the novel and various sub plots going on underneath the main drama. It was full of suspense and intrigue and I found myself thinking of what would happen next every time I put it down to go to bed. It fun and kinda ridiculous at times but it is a really good debut. I am looking forward to what else Julia will publish in the future.

This is a fun stand alone thriller that really does capture you into the cut throat world of getting a book published. Full of twists and turns, intense moments and endless drama this is a great holiday read. I’ve recommended it to several friends.